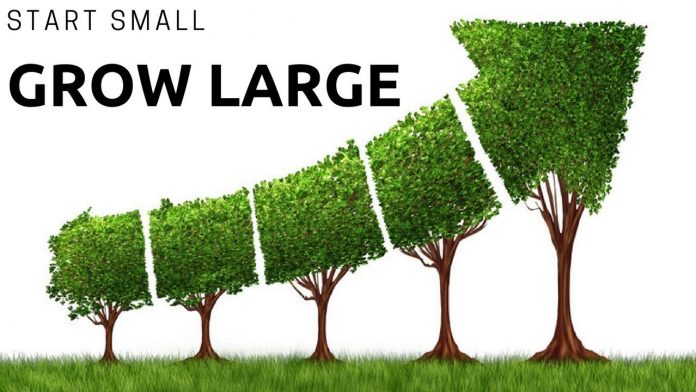 Everything in life starts with a beginning and often times beginnings are usually very small and that is why a lot of people do despise it.

What most people don’t realise is that; for anything to be great, it has to be started. How you handle the start will determine your acceleration to the next level.

For example, there is a very popular radio on-air personality who started with a particular radio station that paid him 6million Naira per annum. The money wasn’t really paying all his bills, but he kept giving his best and being the best at what he was doing regardless of the fact that the salary wasn’t paying his bills comfortably. In the process of being faithful with the job that is barely paying his salary, another employer who could afford to pay him more than enough that he his doing at his current employment, asked how much he’s been paid and he gave an honest answer (6 million naira).

Then he was further asked how much he would like to be paid if he was employed, he said 10million per annum and the new employer said; consider it done. The employer also added 3 million naira extra as house and car allowance.

What increased his worth is not money, but his willingness to be the very best even when he was not earning enough.

How you handle what you do currently, will determine the level of success or the opportunity that will come your way in life. A whole lot of people are in abject poverty today as a result of joblessness, not because that is where they ought to be, but because they feel they are too big to start small. What they fail to realise is that the only place that they start digging from the top is the grave. Don’t dig your own grave with your own hand, go start small.

Some would rather do nothing than start small. What they don’t understand is that you can’t really do nothing in life, because nothing means non-existence. So how can you do a thing that doesn’t exist whilst you exist. In other words, when you choose to do nothing, it is not nothing you chose to do; you are really doing something. It’s just that what you are doing is passionately working towards your failure in life.

8 Things You Ought To Know in Your StartUp First Year

Can I Launch a Startup While Still Working Full Time Job

Want To Start a Business But Don’t Have any Idea Yet? Read This!

Building a Great Team for Your Start-up, See How

Why Should You Risk Starting a Business When Most Startups Fail!

Q: If I want to become a Millionaire, where do I start?

Can I Launch a Startup While Still Working Full Time Job

Q: If I want to become a Millionaire, where do I...