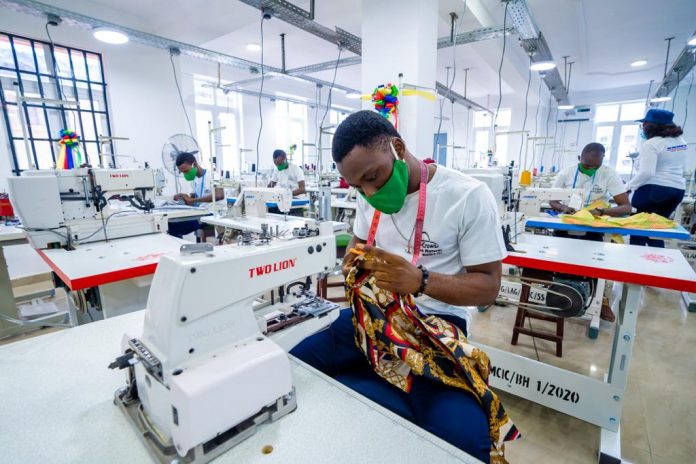 The MSME Fashion Hub-1, which is a shared facility in Lagos State under the National MSME Clinic Scheme is situated around Alade Market, off popular Allen Avenue round-about in Ikeja Lagos State.

The shared fashion facility is expected to serve 380 Micro, Small and Medium fashion designers and tailors daily and will help them increase their revenues with access to industrial machines which was formerly not accessible at their disposal due to the huge cost.

Speaking during the official commissioning of Eko MSME Fashion Hub-1 in Ikeja, Osinbajo and Sanwo-Olu said government at federal and state levels remain committed to promoting and developing small businesses, especially in the areas of skill acquisition.

Osinbajo who joined the commissioning ceremony virtually from Abuja, reiterated the President Muhammadu Buhari administration’s commitment to supporting the growth and development of MSME during and post COVID-19.

The Vice President who promised to provide two additional MSME Fashion hubs to serve Lagos Central and Lagos East senatorial districts as requested by Governor Sanwo-Olu, said the fashion industry is going to be one of Nigeria’s greatest sources of revenue, bigger than oil in the nearest future.

“MSMEs are the engine for Nigeria’s economy because when they thrive, the country thrives and when they struggle, the country struggles. This is why the Federal Government is committed to creating a conductive environment for MSME to do exceedingly well,” he said.

Osinbajo also charged other state governments and the Organised Private Sector to emulate initiatives that would engender the development of MSME across the country.

In his address, Governor Sanwo-Olu said Lagos State is committed to ensuring that micro, small and medium enterprises in the State have the necessary leverage for the generation of lasting wealth, noting that they have an indispensable role to play in the growth and sustainability of Lagos State economy and any other economy.

He also acknowledged the contribution of the Organised Private Sector, Access Bank led by the MD, Mr. Herbert Wigwe, who also joined the commissioning virtually and have partnered both Office of the Vice President and Lagos State, as well as other various Federal Government agencies that have collaborated to make the National MSMEs clinics a success.

Also read:  This Idea Doubled The Sales of My Small Business in Less Than 2 Months

He said: “The success of MSMEs in Lagos State translates to the success of small businesses across the entire sub-Saharan of Africa and Africa as a whole.

“This shared facility that we are commissioning today and we are handing over to the community today is certainly a step in the right direction. It is a win-win situation for everybody as it shows our progressive dedication to the eradication of poverty and the economic emancipation of our people.

“The destiny of several Lagosians is about to positively change because of this facility. This is the beginning of many victories over unemployment and poverty that we are passing on to our citizens.

“This fully equipped shared facility is a demonstration of our APC-led government’s people-driven agenda. Our ultimate goal is to make life better for our people. We have selfless service as a rare privilege as well as an opportunity to leave a legacy of prosperity for our teeming population.”

He said: “This is just the first phase of the Shared Facility Scheme. Leaving here today, we must charge ourselves and say we have unveil one in Lagos West, we need to take this same thing to Lagos Central and Lagos East, and so Mr. Vice President, I am challenging you and myself that within the next six to nine months, we need to replicate this in Obalende in Lagos Central and also replicate it in Yaba Somolu, which will cover Lagos East. When we do this, indeed Lagosians would be happier for both of us.”

“We must resiliently ensure that this is replicated in other parts of Lagos State. Apart from building the Made in Lagos brand, we are set to optimally harness the economic growth and opportunities that are inherent in vibrant MSMEs.”

Also speaking at the ceremony, the Minister of State for Industry Trade and Investment, Ambassador Mariam Katagum, said the shared facility would provide a conducive environment for the SME space.

Katagum, who said that the initiative was one of the key take-aways of the MSME clinic chaired by the Vice President, said shared facilities were effective tools that could address infrastructure challenges which had hindered the growth of SMEs.

She also commended the Lagos State Government for the laudable initiative, particularly at this time when support for SMEs was critical amid the pandemic.

She added that the facility would also enhance productivity of quality apparel capable of competing favourably globally.

“We will continue to partner with the fashion industry, because we believe it would boost local growth of SMEs in that space”, he said.

It is imperative to note that this scheme will also be extended to other clusters in no time.

Listen to the Vice President below.

MSMEs Are Very Important, Government Rely On Them To Reduce Unemployment...