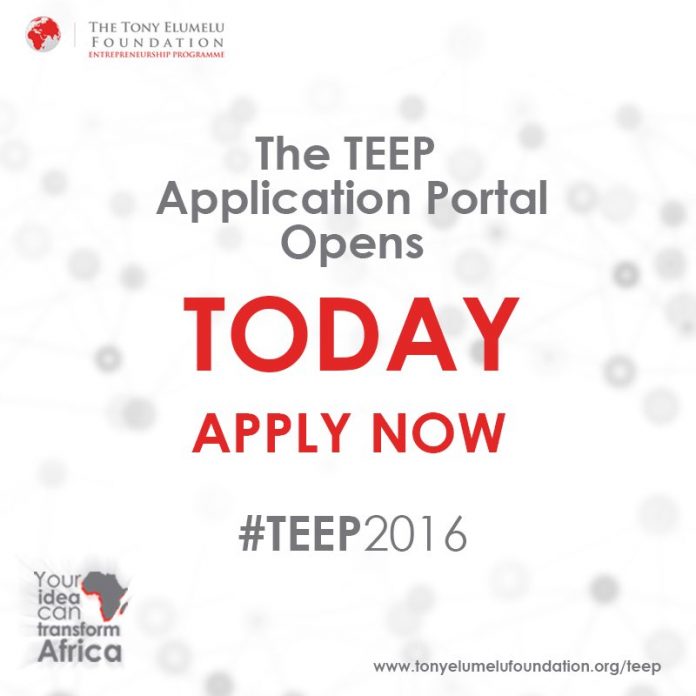 The second annual round of the $100m Tony Elumelu Entrepreneurship Programme (TEEP) for emerging African entrepreneurs has taken off since on the 1st of January 2016.

Serial entrepreneur, Tony Elumelu, personally committed $100 million to empower African entrepreneurs through the Tony Elumelu Entrepreneurship Programme.The vision of this project is to identify and help grow 10,000 start-ups and young businesses from across Africa over the next 10 years, targeting the creation of 1,000,000 new jobs and $10 billion in annual revenues.

“I set out to institutionalise luck with the Foundation and give back to the Continent that made me”, said Tony O. Elumelu, the serial entrepreneur investor and philanthropist, who established the Tony Elumelu Foundation in 2010.  “Entrepreneurship can chart a new course of development for Africa, with Africans taking responsibility for wealth creation, creating value adding businesses here in Africa and this is why I encourage applications from across the Continent, regardless of age, gender, religion or color.” TEEP is driven by Elumelu’s philosophy of Africapitalism, which calls for the African private sector to focus on long term investments that create social and economic prosperity in Africa, and take the lead role in Africa’s transformation.

Also read:  The Largest Business Incubator Platform in the World, from Nigeria

In 2015, TEEP empowered 1,000 African entrepreneurs, selected from over 20,000 applicants, with start-up investment, active mentoring, business training, an entrepreneurship boot camp and regional networking across Africa. The Tony Elumelu Foundation invested a total of $4,860,000, including $1,405,000 in agriculture; $410,000 in education and training; and $365,000 in manufacturing.  The sector-agnostic programme funded start-ups across a further 20 industries, all based in Africa.

Entrepreneurs, with an average age range of 21-40, from 51 African countries completed the programme and received $5,000 in seed capital for their start-up businesses. Tony Elumelu Entrepreneur, Stella Nakatudde, founder of ICT company, Ella Solutions Ltd, based in Uganda, said of her experience: “Since being selected for TEEP 2015, I have learned invaluable life and business lessons, expanded and enriched my business network, opened our first office, hired two staff and closed two web development deals.  TEEP is not just a means to start or propel your business, it is the torch that will light your entrepreneurship journey for life and the pen that will script your story in the new African Narrative.”

In addition to directly supporting African entrepreneurs with “Empowerment Capital”, the Tony Elumelu Foundation uses data gathered to conduct research and advocate for policy improvements to the enabling environment. Earlier this year, the Foundation released a report titled “Unleashing Africa’s Entrepreneurs: Improving the Enabling Environment for Start-ups”, which includes insights based on the most comprehensive and diverse data set on African entrepreneurs ever compiled.

Tony Elumelu Foundation CEO Parminder Vir OBE stated “Africa does not need aid alone, it needs investment and it needs entrepreneurs.  TEEP brings both and our ability to bring capital and the necessary support, for those who will help Africa harness its enormous potential is creating extraordinary opportunities across the Continent.”

The Tony Elumelu Entrepreneurship Programme is open to citizens and legal residents of all 54 African countries. Applications for 2016 has opened since on the 1st of January and can be made by any for-profit business based in Africa in existence for less than three years, including new business ideas.

This July, Over 5,000 African Entrepreneurs Will be Hosted Live in...

Microsoft, Tony Elumelu to empower 10,000 small businesses in Nigeria, other...