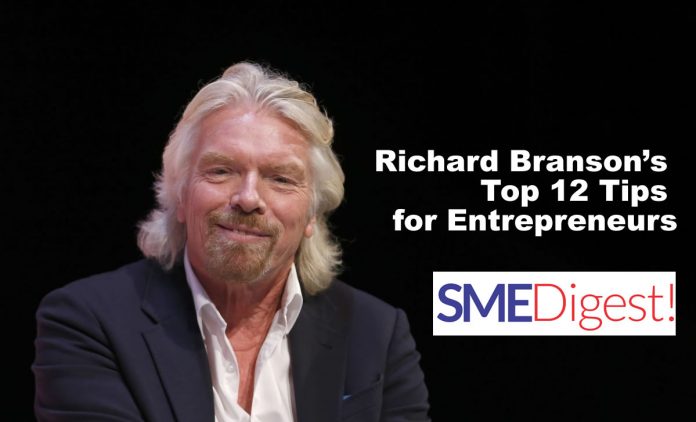 Sir Richard Charles Nicholas Branson (born 18 July 1950) is an English business magnate, investor, and philanthropist. He is best known as the founder of Virgin Group, which comprises more than 400 companies.

Branson expressed his desire to become an entrepreneur at a young age. At the age of sixteen his first business venture was a magazine called Student. In 1970, he set up a mail-order record business. In 1972, he opened a chain of record stores, Virgin Records, later known as Virgin Megastores. Branson’s Virgin brand grew rapidly during the 1980s, as he set up Virgin Atlantic and expanded the Virgin Records music label.

What does it take to think more like Richard? Here’s my list of his Top 12 Tips that I’ve used – and recommend you use – to be a smarter entrepreneur:

Tip #1 – Listen more than you talk. Nobody learned anything by hearing themselves speak.

Tip #2 – Three steps to success: Hire great talent, give them the tools to succeed, and get out of the way.

Tip #4 – It is only by being bold that you get anywhere. If you are a risk-taker, then the art is to protect the downside. The brave may not live forever – But the cautious do not live at all.

Tip #6 – I never get the accountants in before I start up a business. It’s done on gut feeling, especially if I can see that they are taking the mickey out of the consumer.

Tip #7 – You don’t learn to walk by following rules. You learn by doing, and by falling over. One thing is certain in business. You and everyone around you will make mistakes.

Tip #8 – There is no greater thing you can do with your life and your work than follow your passions – in a way that serves the world and you. As soon as something stops being fun, I think it’s time to move on. Life is too short to be unhappy.

Tip #9 – Fun is at the core of the way I like to do business and it has been key to everything I’ve done from the outset. More than any other element, fun is the secret of Virgin’s success.

Tip #10 – If somebody offers you an amazing opportunity but you are not sure you can do it, say yes – then learn how to do it later!

Tip #11 – I have always believed that the only way to cope with a cash crisis is not to contract but to try to expand out of it.

Tip #12 – For a successful entrepreneur it can mean extreme wealth. But with extreme wealth comes extreme responsibility. And the responsibility for me is to invest in creating new businesses, create jobs, employ people, and to put money aside to tackle issues where we can make a difference.

Which one or more of these could you start practicing today?

Also read:  Businesses to Look out for in Nigeria in 2019
Enjoyed What You Read? Click HERE To Join Our Priority List So You Are First To Receive Top Notch Business Article/News