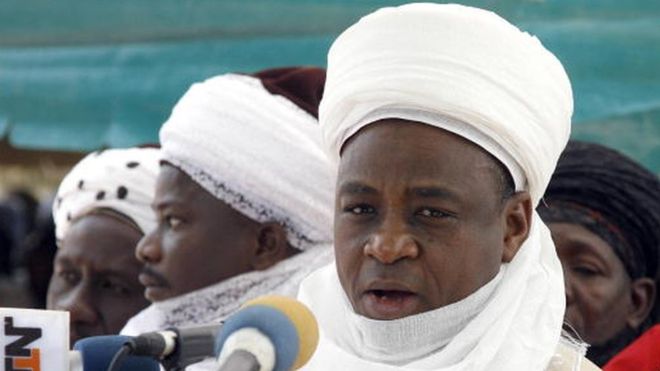 The Sultan of Sokoto, Alhaji Saad Abubakar III Tuesday called on the 19 northern Governors to invest on the small Scale Industries to better the lot of ordinarily citizens across the region.
Sultan Abubakar who spoke in Kano during the second edition of Kano Economic Summit held at the Coronation Hall of Kano Government House said that direct investment on SMEs will create jobs that would ginger lasting peace in the region.

Alhaji Saad Abubakar III said, our people are not greedy like our elite who would want to have all, support the common man with small business to enable them have something to fall back on, and when you do this they would be happy, and we would have peace and decent society.

Sultan who disclosed that Kano was his home, commended the development stride of Governor Ganduje in all spheres of human endeavours, adding; I am here to strengthen him, and encourage him to do more Saad Abubakar revealed that we as traditional rulers are supposed to be seen not heard, and we are working underground to continue to help our political leaders, and we believe in their ability to create jobs, developed our economy and move the country forward.

Abubakar III who picked hole on fast eroding general and societal norms said that we have our culture and tradition, and we must strive at all time not to deviate because that was what made us different from others.

Earlier in a speech, the emir of Kano underscored the need to invest in agriculture, adding that focus on the sector would surely change our economic fortune as a people and as a nation for good.

Sanusi II said that I have repeatedly made it clear that economics was not rocket science, and Nation states that have developed accorded much emphasis on value creation, and these are often achievable through agriculture produce because it takes little to double or tripple the outcome.

The emir of Kano further said that it is about giving farmers right education, how to do the right things, working with them, and giving them access to market.

We have worked with farmers in Kano and Kaduna states, we have seen the borrower anchor programme in agriculture, it’s therefore easier to double our investment in the agricultural sector to get it right.