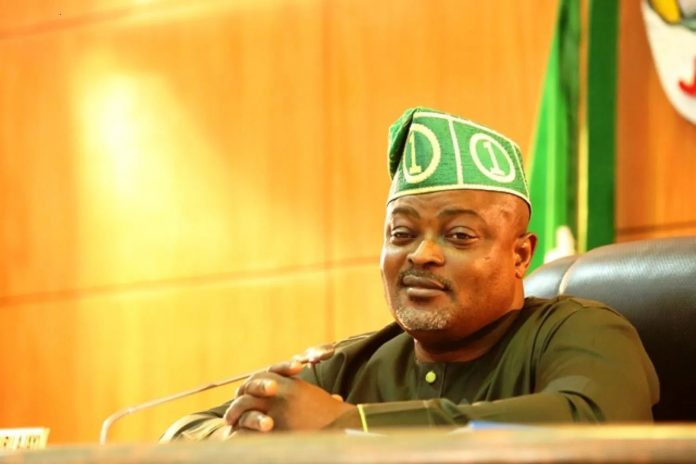 Lagos State House of Assembly speaker, Mudashiru Obasa, has shown his commitment towards infrastructural development in the state.

Various infrastructural projects carried out in the state have been fastracked by Obasa so as to make the state achieve its full economic potential. Such a project is the Pen-Cinema road expansion with overhead bridge which has benefitted many residents of Agege and Lagos residents at large

The speaker has also shown his dire commitment to rail projects in the state.

Speaking at the 2020 budget presentation of Governor Babajide Sanwo-Olu, Obasa reiterated his commitment to the rail projects in the state.

The speaker said: “To indeed move Lagos forward, there is the need to focus more attention on the rail to connect the entire Lagos.

“A rail from Ogun boundary down to Lekki Epe side, a rail from Ikorodu to also the same area should be urgently considered; and the ones under construction must be speedily completed”.

Obasa said that no amount of road patching, rehabilitation and constructions would really solve our transportation problem with the influx of people into Lagos on a daily basis.

Based on the growing population of residents in the state, the Speaker has also championed optimum utilisation of the water transportation.

Speaking during the plenary session, Obasa added that “with fund available or not, we have to start doing something and at the same time, more still need more to be done about water transportation.

“The Ilo Rivers running from Sango linking Alimosho, Ojo, Amuwo back to CMS and Odo Iya Alaro and runs up to Ikorodu must be given attention by the governor”

Since his swearing in as the speaker of the Lagos State Assembly in 2015, Rt. Hon Mudashiru Obasa has carried out the affairs of the house in the most matured way.

Mounting with pressure of being tagged a rubber-stamp legislature, Obasa has presided over the affairs of the Assembly without much skirmishes.

The speaker has consistently reiterated his vision to transform Lagos to Dubai in line with the vision of the different state executives he has shared a tenure with.

Despite this, the state Assembly under Obasa has proven to be efficient in terms of checking the autocratic tendencies of the the executive.

During the previous administration, the Speaker set up committees to monitor the different projects being carried out in the state. In probing the activities of the executive further, Obasa inaugurated a committee to probe the over ₦5.7billion spent in carrying out road projects during the Ambode administration.

The progress recorded in Lagos State in recent years cannot be disconnected from the will shown by the Obasa led house of Assembly. The Assembly has been synonymous with speedy passage of bills aiding infrastructural and human development in the state.