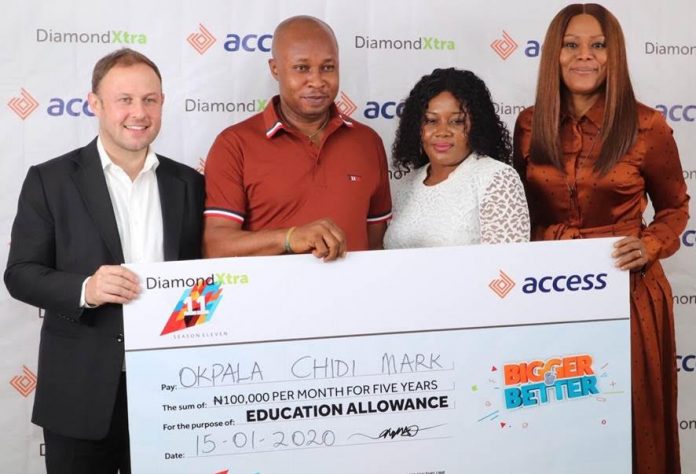 It was yet another rewarding moment at the Access bank DiamnodXtra Season 11 reward scheme, putting smile on customers’ faces once again.

Access bank has stayed true to their promise for 11 years in empowering people with Salary for life, Rent allowance, Education allowance (for 5 years) and many more.

The joy on the winners’ faces couldn’t have been overestimated yesterday as they described their reactions when they were called upon.

Nwakwe Gabriel from Abia state who was represented by his son, Kelechi won the Rent for a year worth 1 million naira. When asked, he said he doubted at first when he was called but the son told him to give it a shot. Upon verification, he confirmed it was REAL.

Another Mrs Adewale Winfred Abosede who won the sum of two hundred and fifty thousand naira (N250,000) in the Senior Citizen category shared her experience too. She also doubted when called upon but the daughter motivated her to go confirm from her branch. On getting there the security directed her to the manager’s office who confirmed her winning. According to her “I was in shock right there and then”. She later declared that Access bank is the best!

Also read:  How To Get Banks To Stamp Your Business With Loan (Part 1)

Okpala Chidi Mark a business man who won education allowance, N100,000 per month for five years said he was reluctant when he was called. He didn’t even bother till 2 days later when he remembered and went to a closer branch to verify and to his amazement it was confirmed.

Ahmed Abimbola who won 1 million naira said he didn’t doubt because he was called by Chigal, the Nigerian celebrity that fronted the DiamondXtra advert. He said he recognized her voice and believed in excitement.

Also speaking at the event is the Head, Retail Product insight and capabilities, Access Bank Plc, Rob Giles, who said since inception, Access bank has spent over 5 billion rewarding over 20,000 customers in this scheme, giving them the opportunity to win 1 million naira, salary for life, education allowance and many more.

He stated that this is a great opportunity to partake and win funds to start your business as they prepare for the season 12 edition. He disclosed that there is a whole lot in stock for season 12 which would be let out of the bag during the launch next month. According to Rob, Access bank will continue to stay true to their promises of salary for life, rent allowance, education allowance and everything their customers requested, coupled with more exciting features.

Adaeze Umeh, Group Head Consumer Banking, Access Bank said all you need to do to partake in this reward scheme is open a DiamondXtra account and fund with a minimum of N5,000 to qualify for a ticket. If you do in excess of N5,000, say N50,000, that qualifies you for 10 tickets which improve your chances of winning. The more you save, the more ticket you get, and the more your chances of winning, said Adaeze.

To open a DiamondXtra account is even now simpler than you could think of, simply dial *901*5# right now on your mobile phone.

Starting, Running a Business is Easier now than before – Royal Hair boss

Access Bank brings Banking to the doorstep of Nigerians with over...