Winners of the third edition of the Youth Enterprise with Innovation in Nigeria program on Wednesday stormed the headquarters of the ministry of finance and almost paralysed business activities at the ministry.

The angry youths in their hundreds accused the Minister of Finance, Mrs. Kemi Adeosun and other top officials in the ministry of frustrating the release of their grants which according to them had remained unpaid for about a year.

The awardees described the development as frustrating as it is negatively affecting the business which the initial grant was used to set up in 2014 when their business proposals were approved by the Federal Government.

The YouWin program is an innovative business plan competition aimed at job creation by encouraging and supporting aspiring entrepreneurial youth in Nigeria to develop and execute business ideas.

The accomplishments of the 1,200 YouWiN awardees were celebrated at the Presidential Villa on April 12, 2012.
YouWiN Women was the second edition of the entrepreneurial scheme, which was designed for only female entrepreneurs aged 45 years or less.
The third edition, which supported both male and female entrepreneurs in Nigeria, in 2014 announced the 1500 awardees.
Speaking during the protest, one of the affected awardee in the YouWin 3 program, Mercy Terhile said each beneficiary was expected to receive between N10m and N15m to commence a business.
She said with about 1,500 beneficiaries, the amount being expected would be in the region of between N15bn and N22.5bn

Terhile who claimed she has sacked some of her workers owing to the development said, “In 2014, we were declared winners by the Federal Government in the YouWiN 3 program. 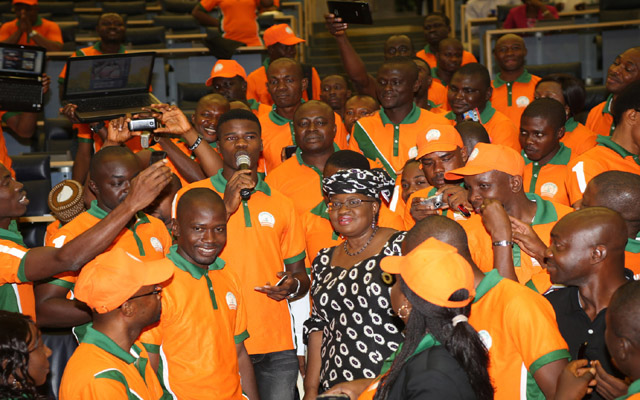 “Some of us were paid the first tranche of our grant before former President Goodluck Jonathan handed over in May last year.
“Since President Muhammadu Buhari took over, no money had been paid to us. Our businesses are dying. We recently learnt that the president had approved that the money be paid to us but the minister of finance and his officials in the ministry are still delaying it for over six months.”

Another beneficiary of the scheme who gave his name as Bobby Adewale said that the ministry attributed the payment delay to non provision of Bank Verification Number by the awardees.

He said, “We heard they moved money from YouWin account in banks to the Treasury Single Account. Later, they claimed that they were waiting for our Personal Identification Number. After that, they claimed we don’t have BVN. About 1,500 people are affected and from our records , only 120 of that figure don’t have BVN, and we are not sure if these 120 people are ghost awardees because they have told us that except they get the BVN of these 120 people, no money would be released to us”.
“This is not fair, how can you delay the payment of 1,380 people because of 120 people who are yet to provide their BVN?”

Also read:  Why Your Business Will Not Turn-over in Millions, Let alone Billions
Enjoyed What You Read? Click HERE To Join Our Priority List So You Are First To Receive Top Notch Business Article/News

List of Aggregators for the FREE 250,000 Business Names Registration –...