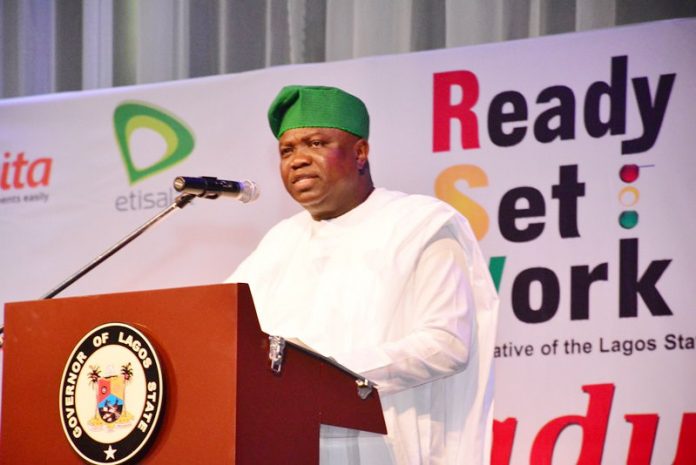 Lagos State government has opened a website, Ready.Set.Work (RSW), to register final year students of tertiary institutions in the state for entrepreneurship and employability scheme designed to equip them with the right skills to add value to the society.
Special Adviser to Governor Akinwunmi Ambode on Education, Mr. Obafela Bank-Olemoh, said that a total of 12, 000 students were billed to be trained with entrepreneurship and employability skills in the maiden edition of the scheme. He said interested applicants would be able to access the website: www.readysetwork.com.ng from June 16, while the training will run from July 1 to September 16, 2017.
Bank-Olemoh disclosed that students of six tertiary institutions in the state would benefit, adding that three centres had been designated to host the training. According to him the institutions are Adeniran Ogunsanya College of Education (ACCOED), Lagos State College of Health Science (LASCOHET), Lagos State Polytechnic (LASPOTECH), Lagos State University (LASU), Michael Otedola College of Education (MOCPED) and University of Lagos (UNILAG).
He said out of the 12, 000 students, 2,000 final year students would be selected for the training at the three designated centres, while the remaining 10,000 would be selected from students in their penultimate year at the institutions and trained through the online platform and also registered for the RSW Academy.

The vision of the RSW is that every graduate from a tertiary institution situated in Lagos must have the knowledge, skills and attitudes required to gain meaningful employment or be self-employed and our plan is to train all graduates in tertiary institutions through the RSW, he stated.
Also read:  PERCEPTION - How It Determines Your Price
The Governors aide said beneficiaries of the scheme would be selected to participate only on competence and would be trained for 13 weeks on labour market, mindset reorientation, 21st century skills, entrepreneurship, employability skills and teacher track. He said about 750 of the beneficiaries would be helped to secure internship placement and given skill for life, while there would also be seed funding for winners of the business pitch competition to be held as part of the training. On sustainability of the scheme and the need to accommodate other tertiary institutions in the state, Bank-Olemoh said plans were afoot to integrate the RSW into the education curriculum of the state, while also expanding the modules and the benefiting institutions.
Enjoyed What You Read? Click HERE To Join Our Priority List So You Are First To Receive Top Notch Business Article/News